Tottenham Hotspur welcomes West Ham United in a match from the 36th round of the English Premier League. We are going to take a look at this fixture at the Tottenham Hotspur Stadium, because it’s pretty important in the fight for the Top 4.

After their defeat against Manchester City at the Etihad, Tottenham managed to react well by winning against Brighton & Hove Albion at home. But it was not easy, because the winning goal came in the 88th minute of the game. It was Christian Eriksen, who beat the goalkeeper Matthew Ryan with a terrific long shot. People expected Spurs to be more dominant in this match, but Brighton & Hove defended well. 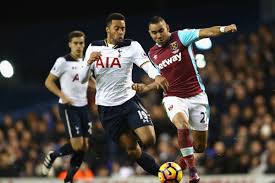 West Ham are 11th in the league with 43 points won so far, trying to finish as high in the standings as possible. It was a rocky season for Manuel Pellegrini’s team, filled with many ups and downs. Right now the Hammers are in a pretty bad shape, winning only one point in their last four matches. This happened against Leicester City in the previous round, when the two teams made a 2-2 draw. Michail Antonio and Lucas Perez scored for the hosts, but their goals were not enough for the win.

Before this draw against the Foxes, West Ham suffered three consecutive losses against Everton, Chelsea and Manchester United.

It shall be an interesting London derby between Tottenham and West Ham on Saturday. This game is much more crucial for the hosts, compared to the visitors. Spurs really need to win here.