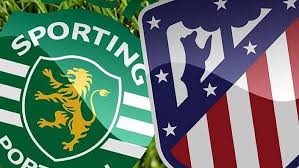 Sporting CP welcomes Atletico Madrid in a second leg from the 1/2-finals of the Europa League. The Spanish team have a solid advantage after a 2-0 win in the first leg in Madrid.

It was a very good game for Atletico. Goals from Koke and Antoine Griezmann gave the Rojiblancos a solid advantage before the second game in Lisboa, which won’t be easy. Despite of this result, Sporting remains a very good team who will try to do something big against Atletico.

It will be very difficult for the Portuguese team after the 0-2 loss in Madrid. Atletico are a team which defends very well and plays with high levels of discipline. Scoring goals against this team is always difficult and now Sporting must do it twice. Plus, they must keep a clean sheet, because every away goal for the Spaniards would make their task even more hard than it is.

Atletico Madrid are arguably the biggest favourites of winning the trophy. They reached the Champions League final twice for the last four years, which tells us that they are a very solid European team at the moment. For sure, they are in a better position to attack the trophy than any other team in the competition right now.

For Sporting the hope dies last, of course. This is one of the greatest clubs in Portugal, so you can’t write them off too easily. But they had to do well in the first match, because this result is not serving them well at the moment.

For Sporting it’s even more complicated, because they shall not concede goals as well. And when you have players like Antoine Griezmann and Diego Costa against you, it’s a really tough task.

These are our comments on the Europa League clash between Sporting CP and Atletico Madrid. Good luck!