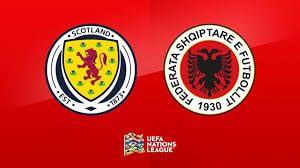 Scotland faces Albania in a match from Group 1 of League C of the UEFA Nations League. These two sides will meet at the Hampden Park in Glasgow. Let’s have a look.

Scotland are about to start their participation at the UEFA’s new competition. The Brits faced Belgium in a friendly match just few days ago at Hampden Park, but they suffered a devastating 0-4 defeat against the Red Devils. Romelu Lukaku, Eden Hazard and Michy Batshuayi (twice) scored for Belgium, proving that right now they are one of the best teams in the world. It was clear that Scotland were the underdogs in this clash, but their fans probably did not expect such a terryfying loss at home.

For Scotland this was a third consecutive loss in friendly matches. They also lost against Peru in May and against Mexico in June.

Albania started their Nations League adventure with a win. Christian Panucci’s boys celebrated a 1-0 win at home against Israel. The only goal in the match was scored by Taulant Xhaka in the 55th minute after an assist from Jahmir Hyka.

For the Albanian team this was a breath of fresh air, because before this they were in a run of three consecutive losses in friendly games – against Norway, Kosovo and Ukraine. Albania also conceded 8 goals in these three matches and scored just one.

Based on their home ground advantage and overall quality, we can say that Scotland are favourites here. The British team will try to catch up with Albania at the top of the group and change its luck after the three consecutive losses so far. As for the Albanian team, Christian Panucci’s side probably would be satisfied even with a point from a strategical point of view. They already started with a win, so not losing in Glasgow is the priority.