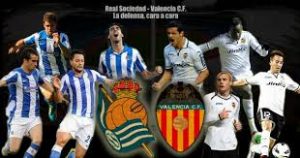 Real Sociedad hosts Valencia in a match from the 6th round of the Spanish La Liga. The game is going to be played at “Anoeta” on Sunday evening.

Real Sociedad started the new season on fire, winning its first three matches for the new season. But right after that, something happened to Eusebio’s team. La Real lost two times in a row – against Real Madrid and Levante, which is the reason why the tean went down to 6th place in the La Liga standings.

Right now Real Sociedad are 6th with 9 points won and goal difference of 11:10. Last season the basques qualified for Europa League, but now their goals are even bigger – to reach the Champions League once again.

After a terrible last season, Valencia are finally starting to regroup. Right now Los Che are 4th in the standings with 9 points won, being unbeaten since the start of the campaign. Their record at the moment is two wins and three draws. Goal difference of 9:3. After being awfully mediocre last season, now Valencia will try to redeem themselves in front of the fans. How can they do it? With a Champions League qualification at least.

Real Sociedad can’t use the suspended Diego Llorente for this game, while Raul Navas and Jon Guridi are injured. Inigo Martinez and Carlos Martinez remain doubtful with injuries for La Real.

As for Valencia, the manager Marcelinho will be without the injured Ruben Vezo, but the good news come from the recovery of Nacho Gil and Robert Ibanez. They have recovered from their injuries and they are once again fit to play for the Los Che.

This is a very interesting and unpredictable game in the Spanish La Liga. Both teams are motivated to finish the season in the Top 4, but only one could win this clash.