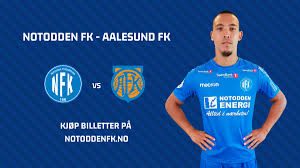 Notodden hosts Aalesund in a game from the 17th round of the Norway’s 1. Division. Let’s have a look at this clash.

Notodden are currently 10th in the 1. Division standings with 20 points won. Their record in the league shows 6 wins, 2 draws and 8 defeats. This is telling us that Notodden are a team which usually doesn’t draw – it either wins or loses. In their last five games they won twice (against Sandnes Ulf and Mjøndalen) and suffered three defeats (against Kongsvinger, Aalesund and Asane).

Right now Notodden are just 5 points behind the 6th Tromsdalen and the promotion playoff zone, so surely they have a chance to attack promotion this season. But in order to do this, they have some catching up to do. They need to be more consistent and they need to start showing it now.

Aalesund on the other hand are the league’s leaders with 35 points won so far. They have a record of 11 wins, 2 draws and 2 defeats since the beginning of the season. Aalesund have won four of their last five games, losing only against Nest-Sotra. This loss was followed by four consecutive wins against Ullensaker / Kisa, Sandnes Ulf, Notodden and Sandnes Ulf again. So far Aalesund are showing everyone that they are a major contender for winning a promotion to the Eliteserien.

The previous game between these two teams ended with a 3-0 win for Aalesund. Sandnes, Agdelstein and Asp (OG) were the men who scored the goals in this clash, which was totally dominated by Aalensund. Now Notodden have the chance to redeem themselves. But we think that Aalesund remain a favourite here, even being away from home. They are just the better team and we expect to see their run of consecutive wins to continue.