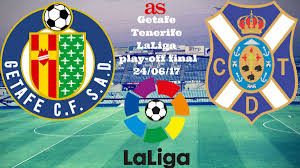 Getafe hosts Tenerife in the second leg of the promotion play-offs in the Spanish Segunda Division. The winner of this tie will play in the La Liga next season.

Tenerife gained an advantage in the first leg, winning it with 1-0 at home. Jorge Saenz scored the only goal in the game, allowing Tenerife to make a serious step towards a return to La Liga.

Now Getafe must play a really good game, if they want to erase the result in the first leg and win the play-off. They are aware that every goal conceded could be fata for their ambitions to win the tie. Tenerife’s goal on the other hand is more than clear – score at least one away goal and make it too difficult for the home team.

Both teams finished very close to each other during the regular season in La Liga. Just two points separated them, with Getafe finishing third and Tenerife fourth. In the promotion play-off semifinals Getafe eliminated Huesca and Tenerife won against Cadiz after extra-time.

Getafe will need their top scorer Jorge Molina to be at his best, if they want to win this tie. Molina have scored 22 goals during the campaign, being one of the most effective strikers in Segunda. He was kept quiet by Tenerife’s defense in the first game, but now he will have the chance to shine and inspire his team.

As for Tenerife, their most dangerous player remains Honduras’ Antony Lozano. He has scored 9 goals during the season, being Tenerife’s most effective striker.

One of these two teams will win promotion for La Liga. Tenerife have the advantage after the first leg, but nothing is over just yet. Getafe will have the opportunity to play at home ground in the second leg, which could be crucial for them. But it’s going to be a competitive game, that’s for sure!