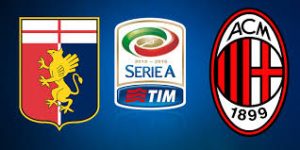 In a match from the 20th round of the Italian Serie A, Genoa hosts Milan at the Stadio Comunale Luigi Ferraris. Let’s have a look at this fixture.

After 19 rounds played, Genoa are 14th in the league standings with 20 points won so far and a record of 5 wins, 5 draws and 9 losses. In their last five games the Griffoni won just once – against Atalanta, also doing two draws and suffering two defeats.

In Genoa’s last fixture they made a 0-0 draw against Fiorentina at home. Cesare Prandelli’s team had some chances to score a winner, but the team’s strikers Piatek and Kouame didn’t have enough luck in Fiorentina’s penalty area. Before this draw, Genoa suffered a defeat, losing its trip to Cagliari.

It’s much more interesting what’s happening with Milan. The Rossoneri are 5th in the Serie A with 31 points. They have a record of 8 wins, 7 draws and 4 defeats in the matches played so far. Right now Milan are just one point behind the 4th Lazio and the Top 4, so you can understand why it’s so important for them to keep winning. In their last league game Milan enjoyed a 2-1 win against SPAL at home, thanks to goals from Samu Castillejo and Gonzalo Higuain.

During the week Milan had another game. Gennaro Gattuso’s boys faced Juventus for the Italian Super Cup, but suffered a 0-1 defeat. Juve’s superstar Cristiano Ronaldo made the difference in the game, winning his first trophy wit Juve.

These are our observations before the Serie A fixture between Genoa and Milan. We shall say that Milan are the favourites here, but remember that the Rossoneri had a game during the week. Genoa will be more fresh than their opponents, so let’s see if this will make a difference.