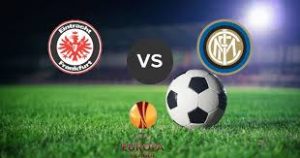 Eintracht Frankfurt welcomes Inter in a first leg from the 1/8-finals of Europa League. Let’s take a look at this fixture at the Commerzbank-Arena in the city of Frankfurt.

The German team reached the 1/8-finals of the competition after eliminating the Ukrainian champion Shakhtar Donetsk in the previous round. The first match in Donetsk ended with a 2-2 draw, but in the second leg Eintracht achieved a thrilling 4-1 win at home. Sebastien Haller scored two goals for the home side, while Luka Jovic and Ante Rebic also put the ball in the Ukrainian net. Junior Moraes scored Shakhtar’s only goal in the match.

So far Eintracht are just brilliant in the competition. They comfortably won their group, beating the likes of Lazio and Olympique Marseille for it. After this they showed a masterclass against a strong side like Shakhtar.

After winning the DFB Pokal last season, now Eintracht are aiming to add another major trophy to their account. In the Bundesliga the team is 5th in the standings, being on just 3 points behind the 4th Borussia M’gladbach and the Top 4.

Inter qualified for the 1/8-finals of Europa League after a dominant display against the Austrian Rapid Wien. After winning the first leg in Wien with 1-0, Inter won the second game with 4-0 at the Stadio San Siro. Matias Vecino, Andrea Ranocchia, Ivan Perisic and Matteo Politano put the ball in the net for the Nerazzurri.

Inter are chasing their first European trophy since 2010, when they managed to win the Champions League under the management of Jose Mourinho.

These are our thoughts about the Europa League 1/8-final clash between Eintracht Frankfurt and Inter on Thursday night. It’s going to be a very competitive game for sure. We wish you good luck!