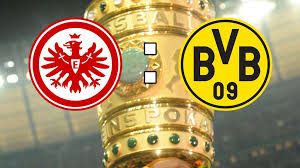 Eintracht Frankfurt faces Borussia Dortmund in a big final for the DFB Pokal in Germany. The game will be played at the Olympiastadion in the capital Berlin.

For a lot of pundits and fans it was a surprise that Eintracht Frankfurt reached the final of the DFB Pokal. But we could say that they had a pretty comfortable route to the final. The last three teams they had to beat were Borussia M’gladbach, Arminia Bielefeld and Hannover 96. They had most problems with Borussia, where the clash was decided after a dramatic penalty shootout.

As for Borussia Dortmund, they reached the final after a win against the biggest favourite for the trophy – Bayern Munich. Thomas Tuchel’s team managed to beat Bayern at the Allianz Arena in Munich, which was a huge triumph for Dortmund. Now they have to finish the job and win the trophy.

So far Eintracht Frankfurt are historically the more successful club in the history of the tournament. They have won it four times so far. For the last time in 1988.

Borussia Dortmund on the other hand have won the DFB Pokal three times in their history. The last time was in 2012, when they were still managed by club legend Jurgen Klopp.

It’s really curious that this is the fourth DFB Pokal final in a row for Borussia Dortmund. But we could say that they didn’t have a much luck, losing three finals in a row – two times against Bayern and once against Wolfsburg.

In the Bundesliga Borussia Dortmund ended their campaign at 3rd place, reaching a direct qualification for the Champions League.

Eintracht Frankfurt finished the season at 11th place, but even if they lose the final, they will participate in the Europa League next season.

The last time when these two teams met was in April, when Eintracht beat Dortmund with 3-1 at home.