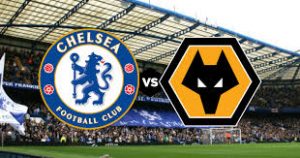 Chelsea welcomes Wolverhampton Wanderers in a match from the 30th round of the English Premier League. Let’s take a look at this fixture at the Stamford Bridge on Sunday.

Chelsea are currently 6th in the Premier League with 56 points, continuing the fight for a Top 4 finish and a return to the Champions League. Right now the Blues are just 2 points behind the 4th Manchester United and they have a game in hand, compared to the Red Devils. Maurizio Sarri’s team still have a solid chance to finish in the Top 4, but Chelsea need to be really consistent until the end of the campaign.

They are not showing this in their last five games – three wins and two losses. Since their humilating 0-6 defeat against Manchester City, Chelsea won two consecutive times against Tottenham and Fulham.

In Chelsea’s last game in the Premier League the Blues celebrated a 2-1 win during the visit to Fulham. Gonzalo Higuain and Jorginho scored for Sarri’s team in the first half of the game. It was an important win for Chelsea.

Meanwhile Wolverhampton are 7th in the league with 43 points won so far. The Wolves are having a record of 12 wins, 7 draws and 10 defeats since the beginning of the season. Being in the Top 7 of the league, this is just a great season for Wolverhampton, especially being a newcomer in the league.

In their last game Nuno Santo’s boys celebrated a win. Wolves faced Cardiff City at home and won with 2-0. Diogo Jota opened the score for Wolverhampton, while Raul Jimenez made it 2-0 just two minutes later.

On paper Chelsea are favourites against Wolverhampton, but Wolves are a serious threat. They will fight at the Stamford Bridge, so be careful with this game.