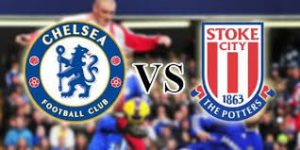 The champion Chelsea welcomes Stoke City in a game from the 21th round of the English Premier League.

Chelsea have a record of 13 wins, 3 draws and 4 losses since the start of the season. The Blues are in a run of four matches without a loss, winning three of them and losing points only during the draw against Everton.

Antonio Conte’s team most surely will be unable to defend its crown as a champion, but the Londoners will try to beat United for the second place.

Their next challenge is called Stoke City. Mark Hughes’ team is 13th in the league standings, having won 20 points so far. Although they are 13th at the moment, Stoke are on just 3 points above the 18th Bournemouth and the relegation zone. This means that Mark Hughes’ boys have to keep a high level until the end of the season, if they want to secure their survival.

So far Stoke have a record of 5 wins, 5 draws and 10 losses. They have won just one of their last five matches. In the last round Stoke made a 1-1 draw against Huddersfield Town away from home.

Chelsea can’t use the Brazilian international David Luiz, who is injured for this clash. He is expected to return to action soon, though.

Stoke City have to deal with the absence of Ryan Shawcross, Bruno Martins Indi and Stephen Ireland, who are all injured. Meanwhile Glen Johnson is doubtful for the next game with a knee injury.