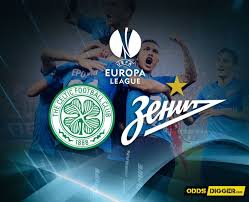 Celtic hosts Zenit in a match from the 1/16-finals of the Europa League. We are going to examine this clash and give you our thoughts about it.

Celtic entered the competition after finishing third in Group B of the Champions League. The Scottish club was in the company of PSG, Bayern Munich and Anderlecht, so it’s understandable why they didn’t reach the knockout phase. Celtic finished the group with just 3 points, but they were enough to beat Anderlecht for the third spot.

Zenit reached the 1/16-finals of Europa League after winning Group L of the competition. Roberto Mancini’s side was in the company of Real Sociedad, Rosenborg and Vardar. They finished their participation with a near perfect record of 16 points, which was enough for them to win the first place.

In the Scottish Premiership Celtic are a convincing leader with 60 points – 8 more than the 2nd Aberdeen. It’s safe to say that Brendan Rodgers’ team is marching on towards another domestic title. Celtic’ last game in the league was dissapointment, though, as they suffered a 0-1 defeat during the visit to Kilmarnock.

Meanwhile in the Russian Premier League Zenit are second in the general standings, trailing on 8 points behind the leader Lokomotiv Moscow. They have 37 points and a record of 10 wins, 7 draws and 3 defeats. In the beginning of the season Zenit were leaders in the league, but their form worsened and they were overtaken by Lokomotiv.

This is our examination of the Europa League 1/16-final game between Celtic and Zenit at the Celtic Park. The Scottish team will have the advantage to play at home, but Zenit would be happy to score an away goal or two. It’s going to be interesting.