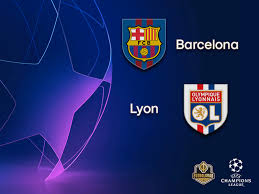 Barcelona hosts Olympique Lyonnais in a second leg from the 1/8-finals of the UEFA Champions League. Let’s take a look at this fixture at the Estadio Camp Nou on Wednesday night.

After a 0-0 draw in Lyonnais in the first game, the second leg now looks very open for both teams. Barcelona’s aim is to win and reach the 1/4-finals, while the French team is aware that even a draw with at least one scored goal will send them to the next phase. Playing at home, Barca are the favourites here and it’s a sure thing, but the Catalans are also in a pretty dangerous situation because of the result in the first leg.

We expect to see Barcelona in their usual 4-3-3 formation against the French side. The manager Ernesto Valverde’s biggest problem is related to the condition of the pacey winger Ousmane Dembele. The world champion with France is recovering from an injury he recieved against Rayo Vallecano in La Liga few days ago. If Dembele is not fit to start the game, most likely he will be replaced by underperforming Philippe Coutinho.

Meawhile Olympique Lyonnais welcome back the influental midfielder Nabil Fekir in the team. Fekir, who is also a champion from the last World Cup, missed the first match with Barcelona because of suspension. Now Les Gones can welcome back one of their most important players back in the starting line-up. It’s very important news for Olympique Lyonnais.

Barcelona are the favourite against Olympique Lyonnias, but the 0-0 draw in the first leg leaves chances to both teams. If the French side manages to score one or two goals at the Camp Nou, it will get very interesting. We expect a really competitive clash between these two teams.